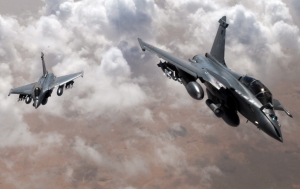 One of the most interesting ideas in French military historian Laurent Henninger’s theory of fluid and solid spaces is its relationship to air operations. This relationship has significant consequences for not only the theory itself, but also on airpower concepts which play such a specific role in the use of military force. Airpower’s main characteristic becomes the ability to “fluidize” solid spaces through targeting effects.

Back to the Dialectics of the Fluid and the Solid

Let’s first recall the foundations of the fluid and solid spaces theory as described by Laurent Henninger: the operational environment may be characterized by its density and viscosity: not in a pattern that induces a spatial or topographical framework, but rather a philosophical or strategic one. This framework overlays the classical terrestrial, air, space, cyber, and maritime domains.[1] From this point of view, “fluid” spaces are not to be confused with the “global commons.”[2] The solid space opposes the fluid one, following a vision summarized by the following table: 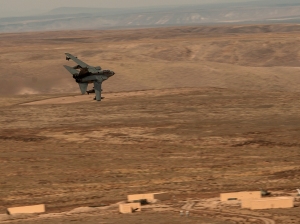 The concepts of fluid – and more particularly solid – spaces are also relative: they are not so much related to specific geographies or environments as they are to movement and displacement, and ultimately to speed and time.[3] De facto, the viscosity of each space varies, with direct consequences on the speed of progressing forces: it is easier to move in the plains than in a city lacking large streets. Similarly, it is faster to move in space than in air, which is in turn even faster than at sea. But this relativity also shows that an approach to determine fluidity and solidity “by the middle” has its limits: between desert sand and an enclosed sea, knowing which of them is more fluid can be tricky. Similarly, some orbits are congested by space debris, reducing their degree of fluidity.

Fluid and solid spaces are also in a complex relationship defined by the interplay between two natures: structural and functional. From a structural point of view, the fluid cannot exist without the solid. Server farms, computers, and cables; air and naval bases; ammunition depots; and industries and training centers are all examples of infrastructure located in solid environments on which fluid environments depend. The latter are necessary for the exploitation of the fluid spaces: the flow is possible only through these points of departure and arrival. In the specific case of airpower, air bases, radars, air traffic control, industrial infrastructure, and maintenance facilities are all located in solid environments. In a number of cases, roads, railways, and ports are necessary for the delivery of fuel, lubricants, parts, or components of future devices as well. 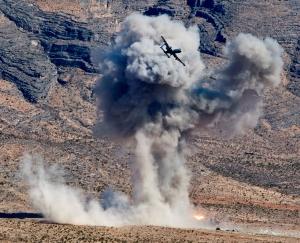 Continuing with the structural point of view, fluid and solid spaces are also bound by their interfaces, where warfare can be tricky. Such is the case for maritime straits or shallow waters that restrict maritime navigation or valleys, hills, and mountains that restrict some flight plans, whether civilian or military. Amphibious operations and close air support, the latter because it traditionally involves low-level flights, can be seen as examples of “interface warfare” between fluid and solid spaces. However, in the case of close air support, such low-level “interface warfare” is not inevitable since the human eye can be offset by the electronic eye of a sensor pod, allowing targeting from higher altitudes.

Switching to a functional point of view, we come more specifically to the strategic problems presented by the interaction between fluid and solid spaces. The defense is Clausewitz’s highest form of war, and it is facilitated by solid environments, especially “striated” environments like urban and mountainous areas which literally direct any movement. Thus, if an offensive force generally requires a ratio of three attackers for every defender, it needs ten attackers for every defender in an urban environment. Conversely, fluid environments facilitate progression and thus the offensive. Air covers 100% of the planet, so the only limitations placed on combat aircraft progression are landscape constraints, operational ceiling, and autonomy. A defensive posture in a fluid environment is more difficult and requires a technology investment in appropriate counter-strategies.[4] This inherently offensive nature of airpower – as underlined by strategists from Douhet[5] to Meilinger[6] to Szafranski[7] – can be extended to all the forms of strategies particular to fluid spaces.[8]

Is Modern Warfare the “Fluidizing” of the Solid?

Characterizing strategic spaces as “fluid” or “solid” is not just an intellectual exercise, it also hides tactical and strategic pitfalls which carry political consequences. One can thus analyze conflicts as a competition between a defender attempting to “solidify the fluid” and an attacker trying to “fluidify the solid.” For Western forces engaged in expeditionary – offensive – operations, the aim is to “fluidize the solid.” Because of the nature of war – reflected in General Beaufre’s dialectic of opposing wills and Clausewitzian reciprocal action laws – the opponent seeks the defensive, and therefore solidification. “Anti-access” strategies are based on defensive interdiction, making them one form of this solidification realization: they aim to make more difficult, if not impossible, expeditionary progressions which depend on fluidity.

Airbase attacks from the land remain problematic and can be classified as solidification attempts. The attack on the Libyan base of Matan As Sarra by Chadian forces in 1987 caused considerable damage: 26 aircraft, 70 tanks, and anti-aircraft missiles were destroyed, and more than 1,700 Libyans were killed.[9] Similarly, the attack on Camp Bastion by a handful of Taliban in 2012 resulted in the destruction of nearly half a squadron of AV-8B Harriers, the worst US aircraft loss since the end of Vietnam. More generally, coalition airbases in Afghanistan have frequently been targeted by rockets and mortars, forcing a significant expansion of patrol perimeters by NATO forces. 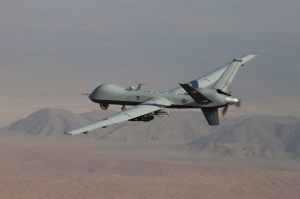 Whereas airpower has historically been about fluidity and high speeds, the major rupture during recent years has been persistence as enabled by slow-speed exploitation. We have seen a new kind of “solidification of the fluid” emerge, but this time to the advantage of the offense. Whereas a reconnaissance flight quickly passes over a zone, slow-speed surveillance allows continuity. Drones and aerostats largely constitute the hardware component of this new type of solidification by their persistence, but not exclusively.[10] In practical terms, however, this solidification is still only a passing trend; even if a MALE (medium-altitude long-endurance) UAV can stay aloft for 24 hours it will still ultimately need to be relieved. There must also be redundancy to ensure the “solidification” of the space. Despite these practical factors, the term “air occupation” is now being used to describe the continuity of presence in the air permitted through planning and asset replacement.[11] This logic is similar to that found in naval strategy.[12]

The other side of this logic is that of “fluidizing the solid.” It is probably what one can call the first “meta-mission” of airpower. The task is not easy: as Henninger recalled, solid spaces “are political and social spaces, meaning both the largest and the most noble senses of the term.”[13] Similarly, they “have the further characteristic of being ‘viscous’ in every sense of the word, literally but especially figuratively, because the soil ‘sticks’ and hinders free progression, as well as human populations, which are the issues and sometimes the actors of conflicts, but also act as ‘brakes’ and obstacles to operations.”[14] “Fluidizing the solid” thus passes through technological means, which are in and of themselves characteristics of air/aerospace power, seapower, and cyberpower.[15] This technological intermediate provides access to a viewing angle that provides a strategic perspective: the verticality is in itself a guarantee of both tactical and strategic ascendancy over the adversary. Saint Exupéry liked to recall that “the plane relearned us the straight line.”

Airpower’s scope is global, but its effective control over the solid is only useful in places where crises and conflicts begin and terminate, where international agreements are concluded, or where air diplomacy can accentuate other representations of power.[16] In this regard, the main contribution of airpower in the “strategic interface” between the fluid and the solid lays in the different air strategy theories. Thus, the value of an air force in terms of political or strategic effects – a.k.a. what any use of force should aspire to – is, from this point of view, intrinsically linked to the following concepts:

This concept of targeting is not “strategic” or “tactical” based on the used technique; nor is it a matter of pods or critical vulnerabilities research. Rather, in this light, targeting is a major political act because it allows an actor to project airpower potential into the heart of an enemy’s disposition to induce systemic effects. Look no further than operations over Vietnam, Serbia, and Kosovo to see cases where the policy value of targets was based on the political pressure created by not striking a particular target.

Airpower is not the only force capable of creating these effects. In fact, all forces are using the third dimension to have impact deep into the battle zone.[17] This specific use is not an air force’s distinguishing element. However, air forces are the only ones to have developed a systemic way of thinking about the physical, strategic, and political morphology of the opponent. Therefore air forces are the most likely to combine a fundamentally fluid identity with the search for results in solid spaces. From this perspective, the real issue of airpower evolution is not to respond to the debate between the tactical school and the strategic one, but it is to deepen the knowledge of the different aspects of the opponent as well as the principles of targeting, including in its political effects.

This article was originally published in French in the April 2015 issue of Défense & Sécurité Internationale. It was translated for Leading Edge by the author.

[3] Note that if, in tactics, the “geography” segment (with all its variations: topography, meteorology, etc.) of the space-time combination is more important, it is the opposite in strategy.

[8] Before the air strategists, Mahan and Corbett as well as Castex believed that the nature of the medium allows forces projections, making the difficult more difficult the defensive. Defending the fluid environments can then only be done through technological means, including coastal batteries, mining, etc.

[12] We think in particular of the « station » rationalities of the Royal Navy or the US Navy.

[15] Moreover, the technological identity of air power is highlighted in many publications.

[16] As defined by Serge Sur as « make, have made, refuse to make, avoid to do” and, we might add, “make know” (faire, faire faire, refuser de faire, empêcher de faire – faire savoir”)

[17] This is the case with naval cruise missiles but also with the GMLRS, a “guided rocket” with a range of more than 70 km.

One thought on “On the Fluid Identity of Airpower”