This paper, by Lieutenant Colonel Scott Gunn, USAF, was originally published by The Strategy Bridge. 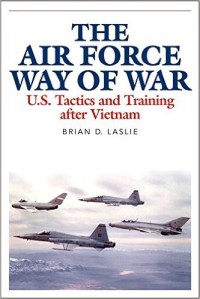 “The four-ship of F-15C Eagles raced across the sky at thirty thousand feet. The flight lead, call sign Death-1, focused on his radar, looking for enemy aircraft in the vicinity. He also knew those enemy aircraft were looking for him.” Brian Laslie’s pulse-racing preface to his new book, The Air Force Way of War: U.S. Tactics and Training After Vietnam, grips the reader’s attention right away, bringing this reader back to the excitement and youthful nervousness of flying over the Nellis ranges on my first Red Flag.

Laslie’s book, however, is not about the aircraft, the pilots, or the enemy in the imagined skies he describes. Instead, he weaves together an intricate history of the causal connections among failures in the skies over Vietnam, revolutions in training and operational preparation of the United States Air Force (USAF) that led to the creation of Red Flag, and the service’s resultant wartime successes of the last three decades. Laslie creates an important work that fills a void in the popular historical narrative, one lacking an appreciation for the human element responsible for transforming a nuclear-focused Air Force into the world’s most potent conventional force — forever blurring the line between tactical and strategic forces. 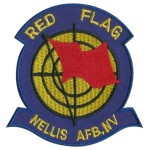 Laslie is the Air Force Deputy Command Historian for Northern Command (NORTHCOM) in Colorado Springs, Colorado. He previously served as the Director, Air Force Office of History, at the 1st Fighter Wing at Langley Air Force Base, Virginia, where he undoubtedly was exposed to and inspired by leading Air Force aviators experienced in Red Flag and Air Force training. Laslie’s enthusiasm for Red Flag and the history behind its invention shines through his account.

A Story of Change 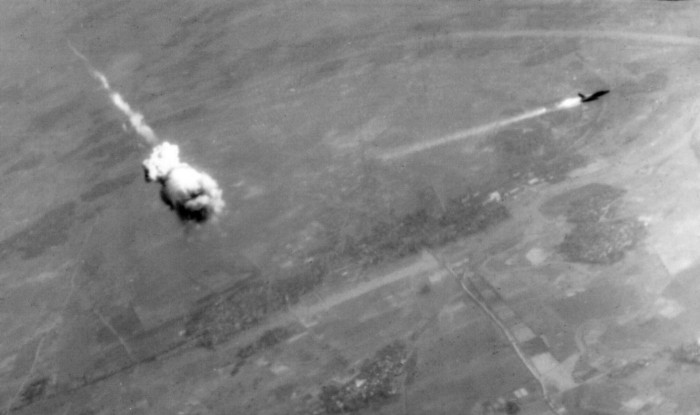 A U.S. Air Force Republic F-105D Thunderchief trailing fire and smoke just after interception by an SA-2 missile on February 14, 1968. The SA-2 did not actually hit the aircraft — instead the warhead was detonated by a command from the tracking radar or by a proximity fuse in the missile when it neared the target, throwing deadly fragments over a wide area. The pilot, Captain Robert Malcolm Elliot, USAF (1929–1968), was killed. His body was not recovered until 1998. (Wikimedia Commons)

Laslie pins America’s lackluster tactical performance in Vietnam on “inadequate training before and during the war.” Pilots received just enough training stateside to be dangerous to themselves when they entered the war. They lacked any experience against different types of aircraft, trained to be jack-of-all-trades but masters of none, and deployed as individuals instead of entire units. The crews’ poor preparation was a result of the USAF’s myopic focus on strategic nuclear war that resulted in limited attention to Tactical Air Command (TAC), who was responsible for training fighter crews for conventional warfare. While America had the technological advantage throughout Vietnam, it suffered many tactical losses due to a failure to prepare their forces effectively, a lesson the USAF took to heart after Vietnam.

Recognition of these failures and the need to change led to a revolution in the USAF’s approach to training and the creation of Red Flag that together proved more essential than technological change in achieving tactical advantage. Laslie’s best work is connecting the failures of Vietnam to the development of designed operational capability (DOC) statements, the “building block approach” to training, and the creation of large, realistic exercises such as Red Flag. These three fundamental changes to how the USAF prepared its fighter crews, and eventually all of its fighting forces, revolutionized how the Air Force prepared its forces, incorporated new technology, and conducted warfare.

Contrary to the conventional wisdom espoused by others, such as Tom Clancy, whom Laslie references, the creation of Red Flag was not a struggle of some young captains and majors, such as then Major “Moody” Suter, against the old guard of Vietnam-era Generals. Laslie makes the successful case that although Suter should be considered the father of Red Flag, post-Vietnam USAF leaders, such as Generals William Wallace Momyer and Robert J. Dixon as heads of TAC, and later General Bill L. Creech, all recognized the need for and supported the creation of Red Flag. 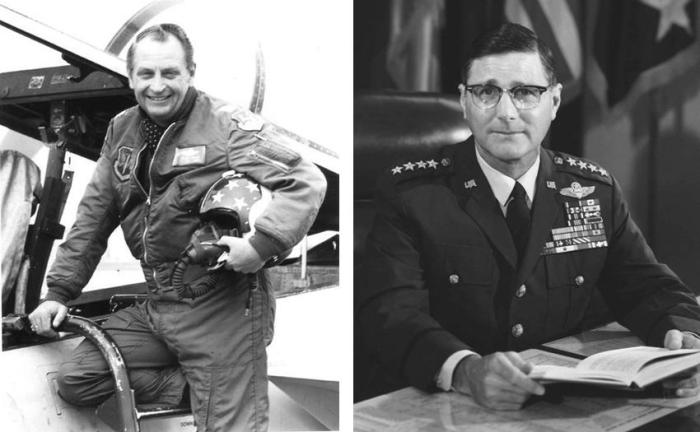 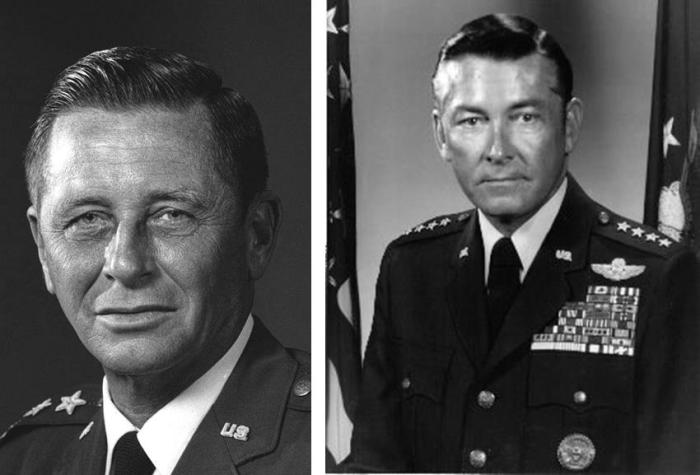 The inaugural Red Flag occurred on November 29, 1975, and the exercise expanded throughout the late 1970s. The description of a maturing Red Flag, important tactical missile and aircraft tests, and the USAF’s incorporation of modern fighters, such as the F-15 and F-16, provides a solid historic primer for the pivotal period that bred the modern and successful USAF. Laslie asserts that more than anything else, the lessons learned from Red Flag changed the way the USAF conducted warfare, blending tactical and “strategic” forces, and led to the nation’s military successes of the last thirty years. Laslie’s historical descriptions of USAF performances in Libya during El Dorado Canyon, Iraq during Desert Storm, and Serbia during Operation Allied Force were engaging and accurate. The historical analysis also successfully illustrates the maturation of the USAF’s tactical fighting force from the ancillary role in which it started Vietnam to the country’s premier asset for generating operational and strategic effects. Unfortunately, Laslie stumbles slightly when asserting that Red Flag holds causal primacy in the creation of the new Air Force.

The Good, the Bad, and the Important

Laslie’s history is well researched, makes readable a sometimes-esoteric subject, and establishes the causal linkages among failures in Vietnam, the establishment of new training methods and Red Flag, and the resultant change in how the USAF conducts operations. As a participant in over twenty Red Flag events, I can personally attest that Laslie’s account is accurate and engaging. He supports well the argument that training and human factors are just as important as technological change to the USAF, if not more so. Where the work oversteps is the assertion that Red Flag was the most powerful force in creating three decades of success.

While Red Flag was important, Laslie also highlights the emergence of the building block approach to instruction and training as well as the growth of the fighter weapons school. He describes these essential training elements and ascribes some importance to them, but seems unwilling to fully appreciate their importance for fear of lessening Red Flag’s. Unfortunately, this diminishes rather than bolsters his account, causing the reader to question how exactly Red Flag, alone or as prime contributing factor, could have led to the successes of El Dorado Canyon, Desert Storm, and Allied Force. Laslie seems to confuse symptom for source, correlation for causation, by attributing Red Flag exercises with causality for change vice acknowledging its import as just one more aspect of sweeping shifts in USAF warfighting, priorities, and leadership after Vietnam.

Ultimately, Laslie’s overstressing of Red Flag’s importance is minor in light of the void his historical account fills. Laslie presciently illuminates the tides of change experienced by the Air Force. Laslie returns the human element into the conventional, but largely inaccurate, narrative that suggests the service is overly focused on technology. This change, however, was occurring with or without Red Flag, although the creation of the large force exercise certainly made the change more effective. 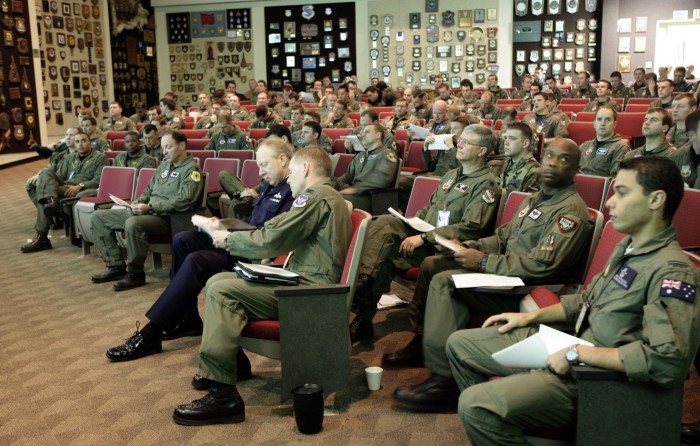 I would recommend this book to anyone wanting to read a history that does more than tell a story, especially to those trying to understand how the USAF became what it is today. This is also an essential read for anyone who has ever experienced (or wanted to experience) the thrill of being a part of the world’s largest aerial exercise of 100+ aircraft battling over the Nevada desert, known as Red Flag.

Laslie’s book is a refreshing look at the people and operational practices whose import far exceeds technological advances. He skillfully illuminates the human depth and endeavors of a service that, rather than worshipping technology, works diligently and intelligently to integrate new technology with the humans who operate it.

Scott Gunn is a Lieutenant Colonel and pilot in the U.S. Air Force. He is a graduate of the USAF’s School of Advanced Air and Space Studies as well as Harvard University. The views expressed in this article are the author’s alone, and do not reflect those of the U.S. Air Force, the Department of Defense, or the U.S. Government.