Drone Over Farm
(Photo by Lima Pix, Some Rights Reserved)

Today, the word “drone” commonly provokes energetic debates – often stemming from the technology’s controversial use in military operations.  Some see drones as precision tools that reduce civilian casualties while eliminating terrorist threats; others see them as extralegal – or even illegal – implements of war.  But while “drone strikes” and the broader military applications of drone technology have long-dominated headlines, drones offer a growing number of promising commercial and humanitarian applications that are frequently overlooked in the public discourse.

Indeed, the technological sophistication of hobbyist and commercial drones has markedly improved in recent years, enabling a range of capabilities and applications that were formerly the monopoly of major military powers.  Commercially available drones can now carry thermal imaging and night-vision surveillance equipment, capture and transmit high-definition images and video, and persist for modest periods of time at growing distances.  These capabilities have steadily increased the use of drones outside of a military context.

For example, drones currently provide a low-cost alternative to helicopters for the purposes of professional photography, videography, and newsgathering.  They are used by the agriculture industry to survey and spray crops, by conservationists to track animal populations and land use, and by oil and gas companies to map and model infrastructure. They are also being considered for parcel delivery – most famously by online retailer Amazon.com – though their use in this and related capacities is currently restricted within the United States by Federal Aviation Administration (FAA) regulations.  As drones are increasingly integrated into airspaces at home and abroad, their commercial use is likely to expand rapidly, in turn driving further development of drone technologies and reducing operating costs for states, non-state actors, and individuals alike.

This increased affordability and capability has extended drone applications beyond the military and commercial realms.  Most notably, aid groups and non-governmental organizations have begun to explore the use of drones across a spectrum of humanitarian applications.  In a pre-crisis or preventive phase, drones can enable low-cost aerial monitoring of population displacements, declining access to resources, unstable environmental conditions (e.g., flooding), and other crisis indicators that can improve situational awareness for aid workers and assist in the assessment and management of continuously changing situations.

In a disaster scenario, drones can provide a number of vital capabilities, particularly in areas that have been rendered impassable or otherwise inaccessible due to difficult terrain or structural collapse.  To this end, small 1.5 kilogram Netra drones were deployed in support of search-and-rescue operations during the 2013 North India floods and landslides, where they were used to select search locations and to identify and geo-reference survivors.  Portable drones were likewise used to expedite damage assessment and to generate real-time intelligence following Typhoon Yolanda.  More recently, drones have been used to provide aid workers with accurate, up-to-date maps of earthquake-damaged structures and roadways in Nepal, aiding in the coordination of relief efforts.  While some of these tasks arguably could have been accomplished using traditional satellite imagery or on-the-ground surveying, the use of drones can “offer major improvements in speed, accuracy, and detail, at lower cost than satellite imagery or other existing tools,” as a UN report on the issue has noted.

As drone technology matures, potential civil applications will continue to expand apace.  First-person-view piloting or better developed sense-and-avoid capabilities – which allow drones to autonomously navigate around obstacles – would dramatically improve the ability of drones to operate both indoors and in dynamic environments, as well as beyond the visual range of the operator.

If employed in a humanitarian capacity, drones equipped with these technologies could enhance tactical intelligence collection efforts in unstable environments while maintaining the safety of aid workers.  In conjunction with increased range and payload capacity, such capabilities could also significantly improve the distribution of aid and other medical supplies in remote or inaccessible areas.

These technologies could provide comparable benefits for commercial drones, increasing their viability across a range of applications, including parcel delivery and persistent agricultural and environmental monitoring.  In addition, first-person-view piloting or mature sense-and-avoid technologies are likely to play a vital role in removing existing line-of-sight regulatory restrictions on drones, and thus in successfully integrating drones into national airspaces – a key factor in expanding their commercial use.

Swarming technology, which would enable groups of drones to autonomously self-coordinate, could similarly expand civil applications for drones, providing, for example, a safe and efficient means of 3-D mapping, tracking, and monitoring.  In a humanitarian context, this technology could additionally be used to identify foci for relief efforts and to optimally sequence the delivery of supplies. 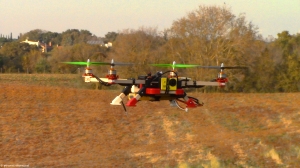 Drone Over Cultivated Field
(Photo by ackab1, Some Rights Reserved)

Despite the potentially significant benefits of employing drones for commercial or humanitarian purposes, a number of challenges remain.  In particular, concerns stemming from privacy, liability, and safety will need to be resolved before drones are fully integrated into national airspaces.  Indeed, a number of recent incidents – from the distribution of unauthorized photos of a private citizen to the injury of spectators at a sporting event – have highlighted the challenges posed by unregulated drone use.

Effectively addressing such challenges in the future will therefore require the incorporation of drones into existing regulatory frameworks as well as the adoption of adaptable, drone-specific standards for data protection, insurance, operator certification, and flight parameters.  Within the United States, the FAA’s recently created Pathfinder Program is designed to test and refine some of these standards; however, many other countries have yet to begin this process.

Beyond the popular conception of drones as weapons or other military tools, drones provide a wide array of commercial and humanitarian applications that will only continue to expand as technology becomes both more affordable and more sophisticated.  If states are to fully leverage these applications, they will need to accelerate efforts to establish shared expectations for responsible drone use and assuage public concerns regarding privacy and safety.  Failure to do so could place significant constraints on further development of critical, non-kinetic applications of drone technology.

Kelley Sayler is an associate fellow with the Defense Strategies and Assessments Program at the Center for a New American Security.